Representing the future of wireless communications with improved speeds up to 100 Gbps — theoretically 100 times faster than 4G — 5G is set to not only ease the task of the broadcaster but also enhance the user experience.

Practically speaking, for the broadcast journalist, this technology eliminates the risk of losing precious time on connection setups, such as network bonding, even when working in crowded environments.

With the optional AETA Remote Access feature, you can control all the parameters of your codecs remotely and in real time via the Internet, including via 4G mobile networks.
The system allows you to control the remote unit from the HTML server well known to AETA codecs users, and so far accessible on local network (LAN).
AETA Remote Access is available on the full range of AETA codecs running over IP:

The AETA “Double Streaming” system is an efficient way of strongly increasing the robustness of an AoIP link, thanks to a redundant link that can compensate for losses on the main link.

Double Streaming relies on setting up two SIP links, simultaneous but via two separate routes: In addition to the “main” SIP link, a “secondary” SIP link is set up between the units. This link transports a copy of the audio stream of the main link. On each codec, a specific transmission interface can be selected for each of the two AoIP connections. In this way two independent routes are created, whose possible losses are not correlated. The codec which receives the two (normally) identical streams recombines them, discarding the duplicates.
The system works on a normal SIP architecture, and is compatible with any SIP server. Like for a normal SIP link, it is also possible to make links without a SIP server.

Double Streaming is available on the following product ranges:

Application note – How to use Double Streaming

Bonding feature is a way to manage an AoIP connection while networks seem saturated and do not give enough bandwidth to a “broadcast” audio quality transmission, thanks to a split of the audio flow on two different networks.

The audio flow is indeed separated in two parts which will be lighter on each etwork.

Bonding also relies on 2 simultaneous SIP links but on two different routes.
Two SIP links will be established  each with a different part of the audio stream. On each codec a specific transmission interface will be chosen to each AoIP connection. Two independant audio links on two different networks  will then be created to maximise the chances to establish a “broadcast” audio flow even with an overloaded network.

The codec receiving the 2 flows will then rebuild the proper audio stream.

The system works on a standard SIP architecture, every SIP server can be used.

Like for a normal SIP link, it is also possible to make links without a SIP server.

Bonding is available on the following product ranges:

As bonding is considered a derivative technology from “double streaming”, you will find relevant information under the same application note.

Application note – How to use Bonding

When enabling this mode, every packet is transmitted twice; with such system a lost packet has no effect since the receiver still gets the other copy of the packet. In this way, stable links can be obtained even with a high packet loss rate. Of course, as a disadvantage the bit rate is double; you must make sure this stays compatible with the transmission medium.

For networks with significant problem, AETA has developped a second of level of packet replication which secures even more the transmission against packet loss.

All AETA codecs operating over IP are able to use the SIP protocol. Using a SIP server greatly simplifies the setting up of a connection. AETA has set up a public SIP server, dedicated to Audio via IP broadcasting applications.
However, “Direct RTP” mode allows you to setup an audio call over an IP network without using the Session Initiation Protocol (SIP).
Please download this application note to see how to operate the codecs using the “Direct RTP” mode.

With the double mono codec option, ScoopTeam, Scoop5 S and Scoop5 S-IP have the ability to function as two mono codecs over IP, each with its own SIP registration.
This feature allows you to establish two independants links toward two different destinations.

All AETA codecs operating in IP have a built-in HTML server for setting device parameters.

Accessible on a local network from a computer, it is also accessible remotely from a simple Internet connection thanks to the AETA Remote Access option.

For supervision needs, a management system can make use of SNMP (Simple Network Management Protocol) for accessing the essential features and status of the units. Trap messages can be configured for the most relevant events.

Multicast is an IP networking technology that provides one-to-many communications between a source and many different recipients.

HD Voice delivers higher quality voice transmissions by extending the frequency of range of traditional or narrowband voice calls (300 Hz to 3400 Hz) out to wideband audio ranges (50 Hz to 7000 Hz). The 7 kHz wideband sound quality allows the full signature character of the reporter’s voice to be heard, leading to greater audience involvement and loyalty.

Look for more about HD Voice in our FAQ page.

Setting an ISDN connection is often difficult, at least because of the numerous coding parameters to be set. Moreover, with most proprietary algorithms, it is mandatory for the two devices to have exactly the same settings, otherwise the connection will fail, and sometimes it is not easy to find out the reason.

5A stands for AETA Audio Advanced Automatic Adjustment. This system makes it easier to set an ISDN connection, because the codec, on receiving a call, automatically adjusts itself, following the calling party algorithm and parameters.

When the 5A System is enabled on the unit and a call is received, the unit first detects the coding algorithm used by the calling codec, and also senses its parameters: audio mode (mono, stereo…), sampling rate, bit rate, inverse multiplexing protocol, etc. Then the unit can decode the compressed audio from the remote unit. In addition, the unit will use these same settings for encoding and sending audio to the remote unit, so that the remote unit can also decode the outgoing audio program. The whole process just takes a few seconds. Of course, all compatible coding configurations can be detected automatically by the 5A System.

Note that the 5A system is only active for ISDN connections.

The N/ACIP UER Tech3326 is an EBU recommendation for interoperability of audio codecs over IP. The EBU recommends in particular the use of SIP and SDP protocols, as well as a minimal set of supported coding algorithms. Our IP Audio Codecs are all compliant with this recommendation, and able to interoperate with several other brands.

AETA has always been proud of offering his customers emote contribution through the voice service of the mobile operator and not only audio over IP. Compared to standard telephony service HD voice was offering a 7kHz audio bandwidth that was allowing better intelligibility from the remote feed to audience. With VoLTE, this possibility carries on not only on 3G networks as before but also on 4G/LTE allowing the remote reporter to contribute even when mobile IP networks are saturated.

Previously, customers were able to double stream through two different mobile networks using one built-in modem plus an external dongle. With the new dual mobile network connectivity option, there are two wireless on-board modems. Thus, external devices are no longer necessary. This makes connections easier and faster to set up. It also allows users to benefit from cost savings thanks to its use of SIM cards, meaning ISDN or wired IP connections aren’t a prerequisite in the quest for quality remote broadcasts anymore.

Dual mobile network connectivity with double streaming and bonding options gives presenters full mobility so they can concentrate on the broadcast and contribute from almost anywhere. Simply put, it makes remotes easier in terms of logistics, and streamlines the tech crew’s task of preparing the system for its roving reporter. For the audience this translates into no hick-ups during the live contribution. They get the information in due time and can enjoy the highest possible audio quality.

The auto jitter buffer technology allows users to set the button to “auto” and the codec will then automatically adapt to changes in the IP network. This will prevent audio link problems when the quality of the network varies during transmission without even having to monitor the network.

The automatic management of OPUS bitrates on AETA units adapts the bandwidth that’s used to the network’s capacity by either upgrading or downgrading the audio. So audio is never interrupted and, where possible, it’s even improved.

Power Over Ethernet technology allows the unit to be powered through the ethernet port and therefore sparing the use of a dedicated power cable. This system saves complexity in the cabling of an infrastucture.

The main advantage of a simultaneous registration on 2 SIP servers is mainly found at studio units that can receive audio stream coming from any of the 2 servers without having to change anything in the device’ settings.

The main advantage of a simultaneous registration on 2 SIP servers is mainly found at studio units that can receive audio stream coming from any of the 2 servers without having to change anything in the device’ settings.

This feature is available on :

AETA embeds in its units both DANTE and RAVENNA technology. AES67 can be found on: 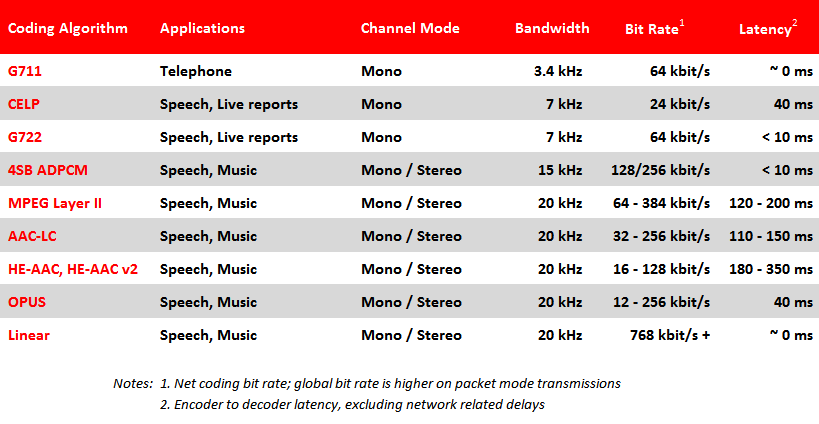